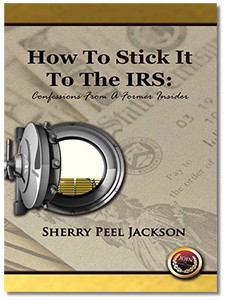 How To Stick It To The IRS

Confessions From A Former Insider

My name is Sherry Peel Jackson and I'm a former IRS agent and a retired CPA and Certified Fraud Examiner. For seven and a half years I audited businesses, individuals, and ministers for the Internal Revenue Service.

I am here to teach you what IRS agents and auditors learn when they are in training, discovering how to conduct audits.I'll show you how they select businesses to audit, the procedures they use and how they think. I'll reveal and explain some of the questions they will ask business owners and I'll let you know red flags that pop up on business and individual tax returns--shining a bright light on you and your business. I will tell you how to prepare for an audit in such a way that can stop them from coming to audit you again.

Sherry describes various ways that the IRS attacks unsuspecting Americans and how you can maximize protection for yourself and your family. Loved the book!

The author goes into great detail about how the IRS works and operates. I give this book 5 stars for the author writes about how to stay out of the IRS' way in the first place. She reveals never to underreport your income along with other never-to-do things. This is an easy read for those interested in this subject matter. 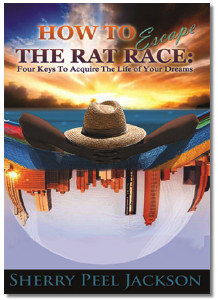 How To Escape The Rat Race:

Four Keys To Acquire The Life Of Your Dreams

Sherry Peel Jackson, a retired Certified Public Accountant and Certified Fraud Examiner and former IRS agent artfully teaches what she learned over a span of over 30 years, while sharing the results of the vicious cycle called “the rat race” – mental breakdowns, broken marriages and even suicide. I’ve even seen people resort to crime, such as embezzlement, just to get relief from the drudgery of the race. Of course there’s a better way.

There are many financial gurus out there who tell you all the wrong ways to escape the rat race. They’ve told you to do everything from get an extra job to sell your house and live in a commune. Many of you have followed their advice but it didn’t free you from the race.

Wealthy people have escaped the rat race. Do you want to escape? Here’s where you learn how. The wealthy people that I interact with haven’t followed traditional methods in decades. Some of them never followed the television gurus at all. They don’t invest in the traditional manner that we’ve been taught via main stream media.

In this book, I will show you the steps to get off at the next exit ramp. You’ll learn how to be financially free by decreasing your expenses and increasing your income. You’ll also learn the proper way to save for future purchases and to invest so that you will have resources in your latter years. You can be out of the rat race in as little as 2 or 3 years if you prepare and follow a plan. You’ll also learn how to help others escape with you.

If you are serious about changing your life's circumstances and are willing to follow instructions from someone who has "been there, done that," then this book is very insightful and is a guide to start you on your way. Great info for a great way to escape.

This book made me think differently on how I spend my money and what I am doing with it. I lack education in creating wealth and this provided with some perspective on what I need to do to better my financial outlook.

Her books encompass many financial, tax and legal topics that can truly change your life! SPJC has been serving clients for over 30 years and we are known as the nation’s leading voice for Pastors, Individuals and Families, Women Entrepreneurs and Small Business Owners. Our team has taught thousands of people how to take control of their own financial destiny and guide their business to profits and growth through Sherry’s powerful business, tax, and legal strategies. Ordering theses books today is something you can’t afford to miss!

GET THE BOOKS NOW

The books are sold only as a set of both books. Your order will be for the set, so please click the button ONCE. If you wish to purchase multiple sets of the books, please contact me. Thank you.